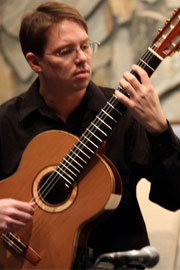 Christian Loebs is the Director of Education at Music 49 where he also teaches guitar and drum lessons. His education includes a Masters Degree in guitar performance, a Masters Degree in music theory/composition and a Bachelors Degree in guitar performance all from East Carolina University and an Associates Degree in fine arts from Central Piedmont Community College. Mr. Loebs has served on the faculty of Chowan University, East Carolina University (as a graduate teaching assistant) and Johnston Community College. Currently Mr. Loebs serves on the Faculty of Central Piedmont Community College teaching music appreciation and the history of rock music. As a classical guitarist Christian has performed concerts from Georgia to Massachusetts. He was a semi-finalist in two international classical guitar competitions. He has premiered works by several composers as well as his own pieces. He has also performed with bands such as My So-Called Band and Movies About Gladiators. He currently performs as a solo classical guitarist and with the band LOEBS. With over 20 years of experience performing, composer and studying music theory Christian has a lot to offer students of all musical backgrounds. 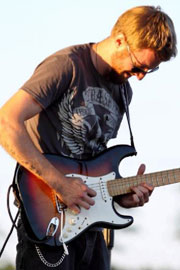 I have been playing guitar for 11 years and have been an Instructor at Music 49 since 2008. I attended Berklee College for the Music's Summer Guitar Program (2003), studied Music at Pfeiffer University, and studied privately with many great Musicians over the years. I’ve won the top prize in two guitar competitions. I currently am the Lead Guitarist in a Blues/Rock band. I teach Music Theory, Improvisation, Technique Development, Harmony, Ear Training, Lead/Rhythm of all musical styles(Acoustic, Rock, Jazz, Blues, Country, Funk), from beginner to advanced. The music I listen to and the people around me have had the biggest impact on me as a musician. My closest friends are great guitar players so I've been very fortunate to stay challenged and motivated to always get better. I try to learn as much as I can from all my influences and express it in my own way. Music is deep reflection of a person’s personality. It’s taught me Discipline, Patience, Commitment, and a deep understanding of myself. Music should be shared with others, so get out there, jam, listen to the greats and learn. There are no limits on what you can achieve if you dedicate yourself. 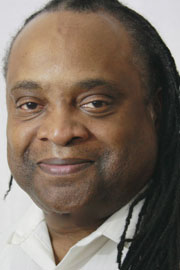 Mike Adams is the piano and voice instructor at Music 49. He is originally from New York where he taught played with various artists and worked as a studio musician.

Throughout the 80's and early 90's Mike traveled all over the United States and parts of Europe playing with Johnny Mathis, Lola Folana, Jane Oliver, Cher, Tiny Tim, D Train, Stanley Turentine, Deniece Williams, Sharon Bryant and Dionne Warwick. As a studio musician he has played in movies such as The Lion King, Beauty and the Beast, The Net, Water World, The Stupids, Operation Dumbo Drop, and National Geographic: The Bengal Tiger.

"As an instructor I will always try my best to get to your goals and expectations. Music isn’t as easy as some people think it is but we try to have fun while we’re learning. I can teach an assortment of styles due to my experiences. I teach music to my students like the subjects the student learn in school. Studies have shown they all go hand in hand. So let’s have some fun and learn how music works!" 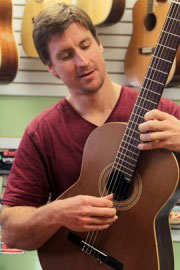 Jason Pickard holds a Masters Degree in music performance from East Carolina University. His classical guitar performances have earned him top prizes in numerous competitions, including the Music Teachers National Association, National Federation of Music Clubs, and The Appalachian State University Guitar Festival. He has performed extensively throughout the Southeast as a soloist as well as an ensemble musician, and competed in the prestigious Guitar Foundation of America solo competition in 1999. He was twice awarded the East Carolina Friends of the School of Music Scholarship, and the St.Cecilia Guitar Scholarship for outstanding musical and academic performance.

In October 2000, Mr. Pickard brought his experience as a music performer and educator to the business world when he was hired as Director of Education for MARS Music, Inc. in Charlotte, NC. Under the Management of Mr. Pickard, the Learning Center of the Charlotte Mars branch achieved top 5 in the country title several times in 2002 when ranked with other learning centers in view of student enrollment, gross profit margins, and community involvement. Throughout his employment with MARS Music, Mr. Pickard volunteered as a board member with the Charlotte Blues Society (director of the Blues in Schools program), and routinely conducted musical programs at MARS Music for the Metrolina Association for the Blind, Charlotte/Mecklenburg public schools, and the Boy Scouts of America.

Currently, Jason Pickard resides in Concord, North Carolina and remains active in the music community in charlotte area as an educator, performer, and classical guitar builder at Music49, Inc., a collection of charlotte's finest music educators.